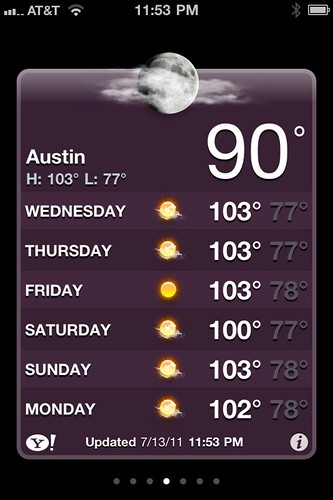 People said that it gets hot here.

I thought that I understood hot. “I’ve lived in hot places before”, I said to myself.

Sure, Sacramento gets pretty warm in the summer. Maybe one or two weeks of 100+ weather in August.

In January, we had snow one week and 70 degree weather the next. By February it was in the 80s, March and April in the mid-90s. By May, we had our first 100 degree day, and I suspect that it has only dipped below 100 briefly a couple times since.

The house AC has been running constantly, I’m scared to open the power bill every month, the lawn is dead (we’ve had just over 4 inches of rain so far this year), and I pretty much hide indoors anytime before midnight.

Amusingly, when it’s this hot for this long, you do sort of get used to it. Kylie and I have gone out a few times lately and said to each other “wow, it’s nice out tonight”, then checked the weather:

5 thoughts on “I was not prepared for this.”