Last week, Agilent released a firmware update for their 1000 series oscilloscopes.  The 1000 series, Agilent’s lowest end line, is a family of powerful yet reasonably priced digital storage oscilloscopes that includes my DSO1014A.

When I downloaded the firmware update and copied it to a USB stick for transfer to the scope, I noticed that the suffix of the file was .RGL.  This reminded me of some rumors I heard a few months back about how Agilent’s low-end scopes are actually manufactured by Rigol Technologies.  Rigol makes some very interesting low cost scopes, including the DS1052E, which was reviewed favorably on EEVblog earlier this year.

I opened the .RGL file in a hex editor, and found this: 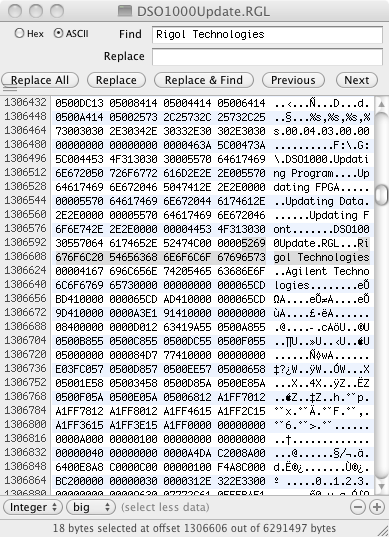 Later in the same file, Rigol shows up again: 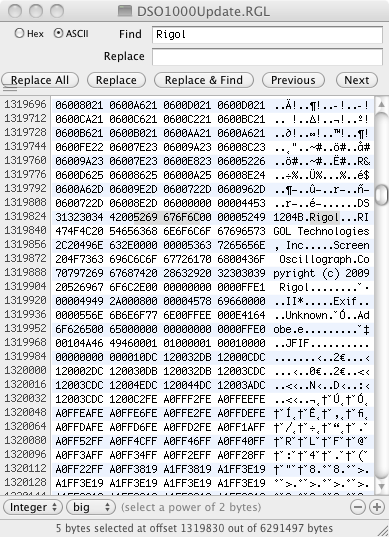 Clearly Rigol is involved with (and probably wrote) the firmware for Agilent scopes.

Interesting also is that the string “DS1204B” shows up in the file.  The DS1204B is a 200MHz Rigol model that looks pretty similar to my scope, and the screenshots are a perfect match too.

I’m not implying that this is a bad thing, just interesting.  If Agilent needs to outsource the design and/or manufacturing of their low end scopes in order to provide an inexpensive entry-level scope with the Agilent badge on it, so be it.  What I haven’t done is actually opened the scope to see if Rigol’s name appears on the hardware as well.  Has anyone voided their warranty to investigate?

One more note, I found the DS1204B for $1895, over $500 less than the retail price of the corresponding Agilent DSO1024A.  This might make the Rigol an attractive alternative if having the Agilent name on your equipment isn’t important to you.  Note that I have not made any effort to go through all the specs for each scope and look for differences.  I wouldn’t be surprised if Agilent added their secret sauce to the DSO1000’s to tweak the performance.  It would certainly be interesting to see a side by side comparison of both scopes.