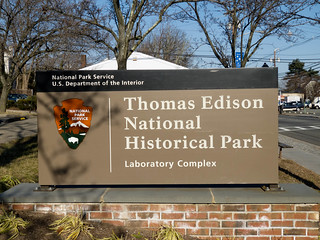 Last month, on my way back home from 28C3, I had the opportunity to visit a truly amazing (and maybe underappreciated) historic site: the Thomas Edison National Historical Park.

The park, which is located in West Orange, New Jersey, includes Thomas Edison’s laboratory complex and his Glenmont mansion. I didn’t get to see the mansion, which frankly was less interesting to me (although I hear it features such novelties as a remotely-switched electrically-heated birdbath). Instead, I decided to focus my tour on the laboratories: 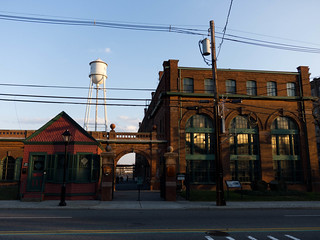 The remaining laboratory buildings are actually only a small part of what used to be a huge industrial factory and research center that spanned several blocks. Only a few of the original structures remain, the rest having been sold off and destroyed to make way for new development. 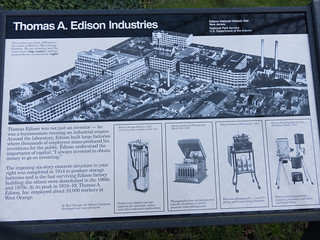 Here are just a few of the businesses that used to be located beyond the complex gates. One has to wonder what the “La Compania Edison Hispano-Americana” did: 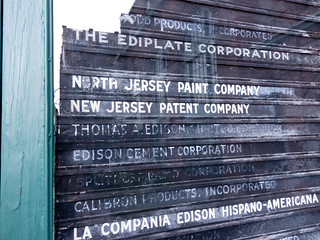 Before I forget: This is not where Edison invented the light bulb. Or the phonograph. This is where Edison refined his original phonograph into a commercially viable product, developed the kinetoscope and several other motion picture devices, and developed Nickel-iron-alkaline storage batteries that powered early electric vehicles, among may other things. Many of Edison’s early inventions were developed in his Menlo Park laboratory in what is now called Edison, NJ.

With that out of the way, back to the tour…

My tour began in the Chemistry Lab. 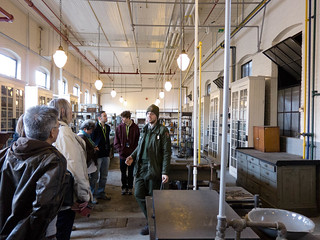 The lab is (not surprisingly) wired with DC, and there are many DC outlets sprinkled around the lab: 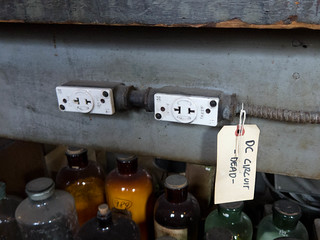 There are chemicals everywhere. Storage cabinets on the walls are filled with hundreds of glass bottles, organized by base element (Antimony, Lead, Magnesium, Calcium). 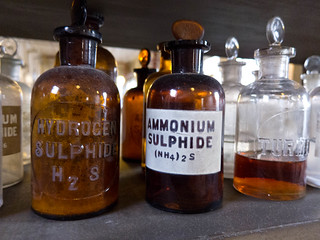 The lab has been beautifully restored: 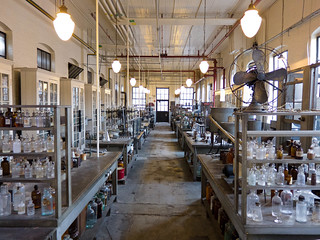 I last visited here over 20 years ago with my grandfather, and while my memories are fuzzy, I do not remember the facilities being in this condition. This is likely because the complex has seen significant restoration work in recent years. Just outside the chemistry lab, there is a small square on one wall that is still in unrestored condition: 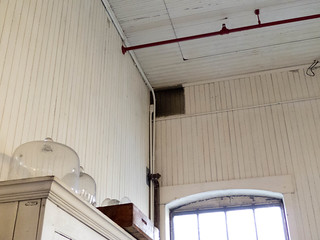 After completing the chemistry lab tour (which I believe is the only guided tour at the facility), I moved on to the building that houses Edison’s library, a room bathed in incandescent light: 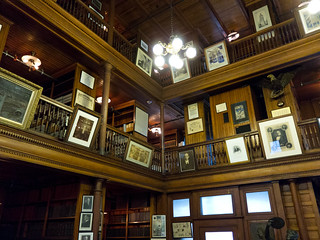 Very prominently featured in the library is this angel, who is holding aloft a lightbulb. I sense more than a little bit of ego here… 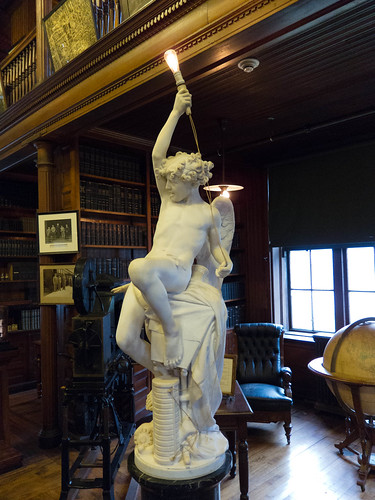 In one corner, a cubic foot of copper, a gift from a group of mining and smelting companies, who were no doubt overjoyed by the success of Edison’s electric lighting system and other inventions. 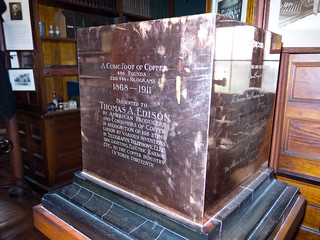 Here is Edison’s desk, though apparently he did not spend much time here, preferring to work upstairs in a more modest room: 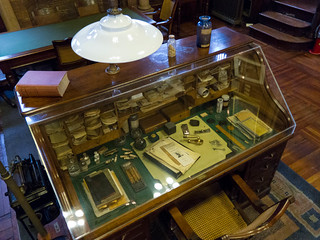 Moving on, I next visited the storeroom, home to not only tools but also samples of hundreds if not thousands of natural materials. It is reported that this storeroom contains everything from a tortoise shell and elephant hide to “the eyeballs of a US senator”: 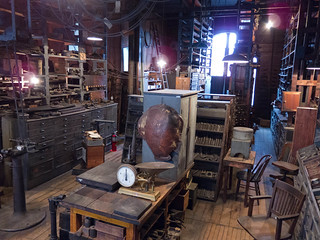 The storeroom is the gateway to the most spectacular room in the complex, the heavy machine shop: 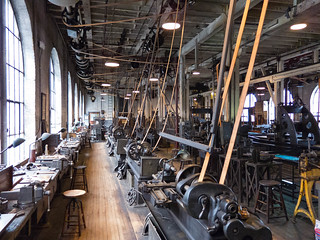 Power for the machines originates at two enormous motors located in the back of the shop: 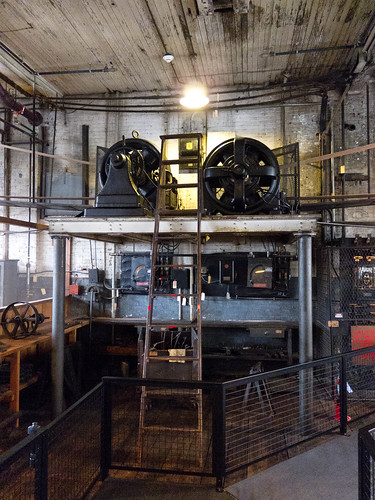 It is then transmitted through a terrifying network of pulleys and exposed belts to each of the machines. This was not a safe place to work: 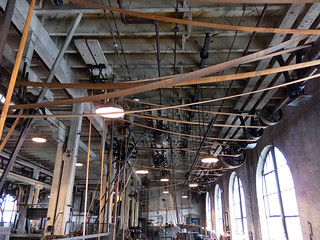 Upstairs is the precision machine shop, where the machines are smaller and more unusual: 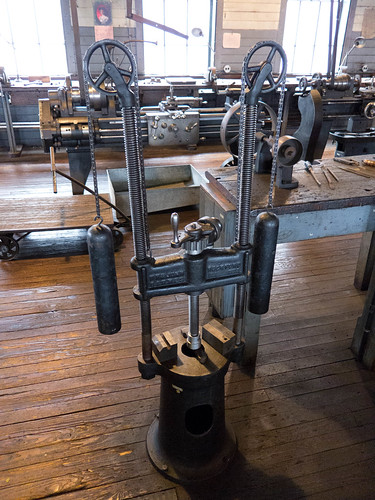 Just off the precision machine shop is the room where Edison preferred to work, surrounded by chemicals and his experiments, conveniently close to the machine shop foreman’s office: 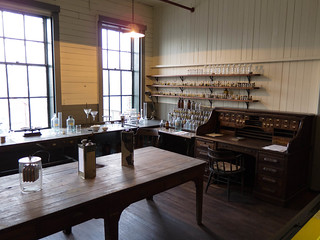 Another room upstairs housed a recording studio for what was likely the world’s first record company. It is amusing to think that records were being recorded right next to an active machine shop, but apparently the sensitivity of early recording devices was so low that they did not pick up background noise. 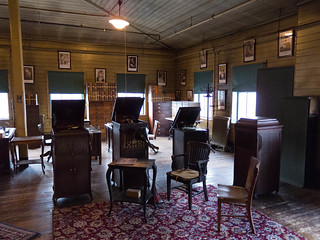 You can imagine a performer belting into one of these primitive devices, surrounded by many different types of recording cones, suitable for various instruments: 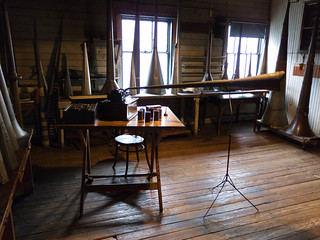 The upstairs halls are lined with artifacts from the Edison company. The first phonograph: 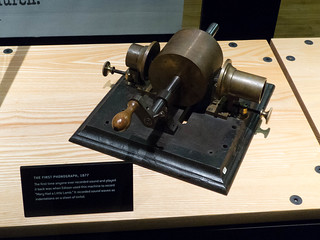 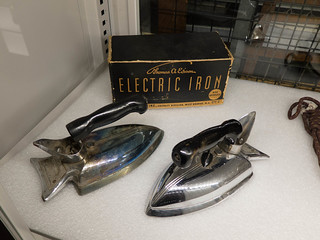 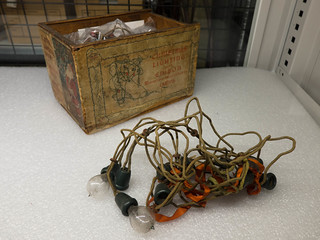 Back outside, here is the Black Maria, Edison’s famous motion picture recording studio. The first studio of its kind, the roof opens and the entire building can be rotated to capture the maximum amount of outside light, which was required by early movie cameras: 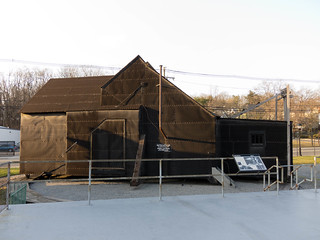 Apparently during WWII the Edison Company saw itself as a target, and constructed this bunker to protect and preserve documents and artifacts in their collection: 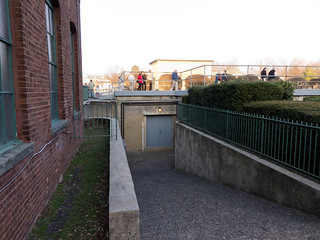 This concluded my tour. There are many more photos of the laboratory complex in this flickr set. And if you are ever in the area, I highly recommend paying a visit to this historic site.