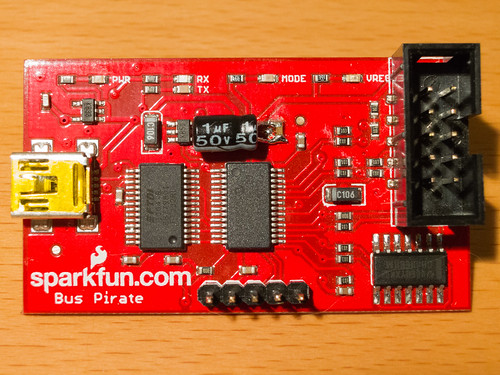 I picked up this Sparkfun Bus Pirate a couple years ago (thanks to Free Day!) It sat in a box for most of its life until recently I needed a simple way to interface a PC to an I2C device at work.  Out came the Bus Pirate.

I’m fortunate to have an Agilent MSO-X 3000 series scope at the office. This scope includes I2C decode capability on both analog and digital channels. I had been having some trouble with corrupt data coming in on the digital channels, so before connecting the Bus Pirate I switched to using analog channels 1 and 2 to decode I2C clock and data instead.

After sending a few test packets with the Bus Pirate, I noticed something weird – the logic high level had a tiny sawtooth waveform riding on it. Not good. 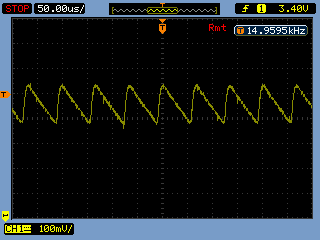 After removing my device under test, I quickly narrowed the problem down to noise on the Bus Pirate’s 3.3V rail. I initially suspected that this might be some kind of noise coming from the 5V USB supply, so I added an additional 10uF cap in parallel with the 1uF already on the board (C1). The sawtooth increased drastically in amplitude and went down sharply in frequency. That’s when I realized that this wasn’t noise, it was a power supply oscillation.

The Bus Pirate uses a Micrel MIC5025-3.3YM5 regulator (VR3 in this schematic) to create the 3.3V rail from USB’s 5V. In the datasheet, there is a familiar warning: “Ultra-low-ESR capacitors can cause a low amplitude oscillation on the output and/or underdamped transient response.” The Bus Pirate uses a ceramic cap for C1, I’m not sure of the type but it could easily be NPO/C0G and quite low ESR. Adding another 10uF ceramic cap lowered the ESR (and SRF) of the parallel combination, bad news for supply stability.

Realizing that low ESR of ceramic caps was likely part of the problem, I took a different approach. I went around the lab and found the crappiest cap I could find, a 1uF/50V electrolytic, and put that across C1 instead.

After adding the new cap, this is what the 3.3V rail looks like: 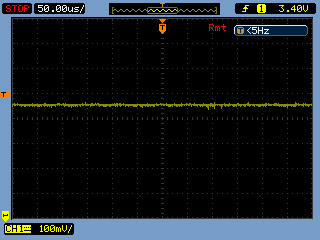 No more oscillation. This is with the original C1 still in place (see the photo at the top).

I don’t think Sparkfun has changed the design of their Bus Pirate clone in the years since I purchased mine, so if you’ve got one of these on your bench, throw a scope on the 3.3V DUT supply (after enabling it) and see what you find. You might be surprised.

Unless I am mistaken, a very similar regulator & bypass cap is used on all Dangerous Prototypes v3 and v4 Bus Pirates (including clones), so this is something to watch out for on any Bus Pirate on the wild.