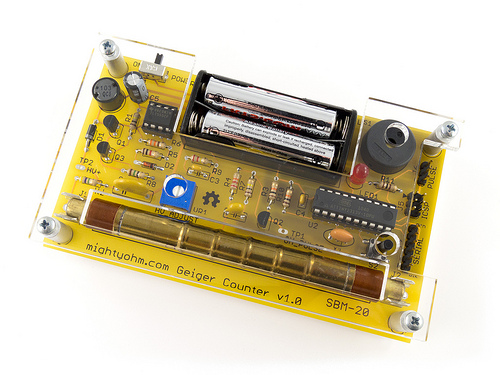 If you are one of the lucky people that has somehow procured a ticket for Chaos Camp 2019 on August 21-25, 2019 outside of Berlin, I’ll be leading two Geiger Counter workshops over the course of the week.

If you’re at Camp, stop by and say hello! I’ll be spending most of the week in the Hardware Hacking Area.

See you at Camp!

Follow these links for more information about the workshop at Chaos Camp, and the Geiger Kit itself.

Sorry for the poor quality of the video – this is a camp, after all.

In just two weeks I’ll be pitching my tent at the 2011 Chaos Communications Camp in Finowfurt, Germany, just outside of Berlin.

Chaos Communications Camp is a five day outdoor camp for “hackers and associated life-forms.”  There are talks, workshops, and many opportunities to socialize with fellow hackers, as well as enjoy the paradise that is a summer camp with showers, high-speed internet and AC power to every tent.  (This is definitely my kind of camping!)

Here’s a short video about the last Chaos Camp in 2007, to give you a taste of what it’s all about:

At Camp this year, I’m giving a workshop on building a simple Geiger Counter (more details about this project to come) in the Hardware Hacking Tent on Thursday and Saturday.

PCBs are due Friday, I’m still tweaking the circuit design, there is code to write…  Many last minute preparations. Fun!

If you’re going to Camp, I’ll see you there. If not, there is probably still time to book a flight. 🙂