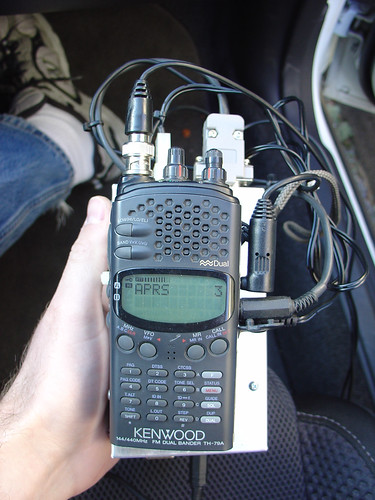 This week, my brother is relocating from the San Francico Bay Area to Texarkana, Texas.  I’m helping him move, so for the next two weeks we’ll be on a road trip through California, Arizona, New Mexico, Texas, and maybe a little bit of Oklahoma.  We’re planning to see the Very Large Array, visit Truth or Consequences, and check out The Black Hole in Los Alamos.  That is, if the trailer stays connected and we don’t break down too many times on the way.

I though this would be a good opportunity to dust off my APRS tracker so friends and family can watch our progress.

APRS, short for Automatic Packet Reporting System, is a radio network that uses amateur radio frequencies to relay short messages.  Think of it as a precursor to twitter, developed 20+ years ago by Bob Bruinga, WB4APR.  The messages usually contain GPS coordinates, and they are relayed via radio to internet connected stations that send the data to the APRS-IS network.  Database servers, such as findU, cache the packets so that client software can access them without needing a radio or realtime access to the network.

The coolest client I have seen so far is aprs.fi, a clever mashup of APRS and Google Maps:

I made this APRS tracking box a couple years ago, so I’m a little fuzzy on the construction details, but it consists of the following parts:

The APRS tracker acquires a GPS fix and the current GPS time.  Every so often (fully configurable), it transmits my position over the radio, where it is received by other APRS relay stations in the area.  Speed, direction, and altitude are also included with the position packet.  I connected a piezo buzzer to the TX signal so I hear a beep when the position is transmitted.  Within a few minutes, a point corresponding to the position shows up on the map at aprs.fi or in the findu database.

It’s really neat to play with, especially on long trips.  On a trip to Moab two years ago, my position was received by the APRS network even in areas with no cell coverage, which included most of Utah!

Note that to use the APRS system, you need to have an amateur radio license.  If you’ve ever been interested in amateur radio, this is a really good reason to get your license