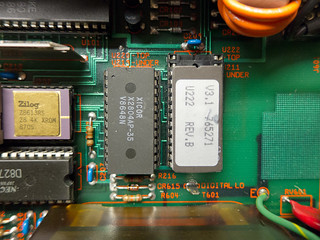 In December I received a strange request from Franci, S57FK. He had a sick Fluke 8842A digital multimeter with a bad processor and was in desperate need of some EPROM images. He noticed that I had an identical Fluke sitting on my bench and was hoping that I could read the contents of the EPROMs inside my unit and send them to him so that he could get his meter running again.

I said sure, but I had a problem – I didn’t own an EPROM programmer.

Well, I had been looking for an excuse to buy one for a while, so I went on eBay and bought one of the cheapest EPROM programmers I could find (for $15).

The programmer, which is a Willem clone, arrived some weeks later: 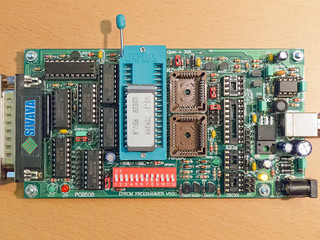 As an aside, the Fluke 8842A uses a weird Z80 processor with stacked external EPROM storage (I think EMSL has shown pictures of these in the past): 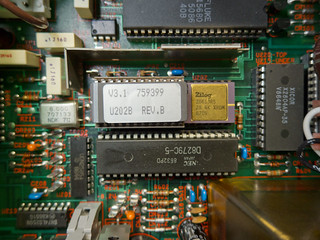 The next problem I ran into was that the “old” (circa 2004) Windows XP laptop I use in the lab didn’t have a parallel port, so I had to find a way to run the klunky old Willem software on my new desktop PC, which runs Windows 7 64-bit (but surprisingly does have a parallel port). The Willem software is written for Windows XP and won’t run on Windows 7, at least not the 64-bit version. 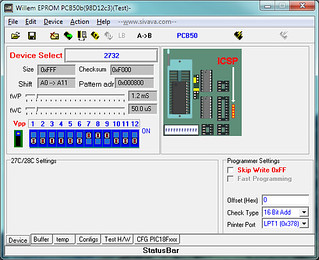 It is probably a good idea to look at the contents of the resulting BIN files to make sure they aren’t all zeroes (that happened to me once) and contain something that looks like valid data.  You’ll need a hex editor for this. I used HxD.

I sent the files to Franci, and he was able to get his meter working again. Success!

Note: If you came here looking for EPROM images for the Fluke 8842A, I added them to the Test Equipment page on the wiki.

I was a little bit nervous to put everything back together again, fearing that I might have accidentally ‘zapped’ one of the EPROMs while I was learning how to use the programmer. Fortunately, the meter still works just fine: 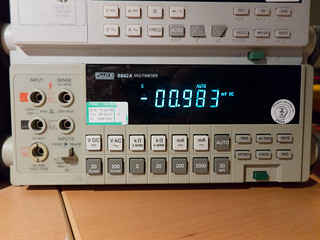 9 thoughts on “Adventures with EPROMs”