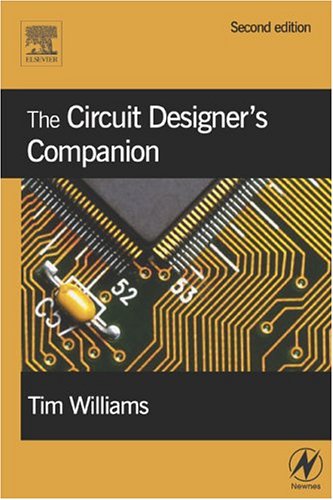 after I noticed it on my Amazon

recommendations list (which seems to know my tastes a little too well these days.)

This is a fun and useful book.  The emphasis is on practical information that is useful to working engineers, not PhD students.   This means that there are a lot fewer equations in this book than The Art of Electronics and it’s a lot less intimidating for someone without a degree in Electrical Engineering.  The book’s roughly 400 pages include topics such grounding and shielding sensitive circuits, some basic tips for routing PCBs, why it’s usually better to buy a switching power supply than build your own, some comparisons of batteries, and how to pick a fuse.  (Sadly, the latest microcontrollers and Lithium battery technologies are missing – not surprising, since the 2nd edition was released in 2005.  Time for an update?)

I like Williams’ writing style, and usually pick this book up first to see if he has a quick solution to the problem at hand before diving into one of my more dense engineering texts.  While this book isn’t a replacement for my other (heavier) reference books, it’s a welcome addition to my desk.  I keep it within easy reach. 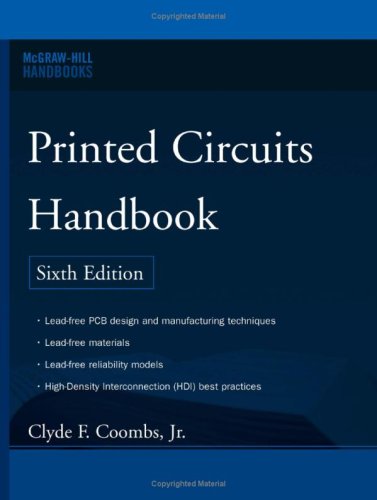 If The Art of Electronics is the bible of electronic circuit design, then the Printed Circuits Handbook

is almost certainly the bible of printed circuit board (PCB) technology.

I say this because even if you disregard the volumes of useful information inside (much of which I have never seen elsewhere online or in print), this book deserves to win ‘bible’ status thanks to its 1000 pages and phonebook-quality heft!

All joking aside, this book is a great resource for anyone is serious about making good PCBs.  I have worked with PCBs as a design engineer for several years now, and I learned something about printed circuit boards within minutes of opening the cover.  Hours later, I was still flipping pages.

How could I walk away from a book that contains in depth discussions of topics like the difference between water soluble and no-clean flux and how to clean the leftover residue from each?  Ever wondered what the myriad of surface finish options your PCB vendor offers you really mean?  This book will explain the difference between HASL and ENIG, and why you shouldn’t blindly check the box that says “lead-free” without considering the consequences on your assembly process.

This is the kind of stuff they don’t teach you in school, and as a design engineer I have received only glimpses of in the industry.

Some of the highlights of this book for me are:

Be forewarned that the technical level of this book is fairly high.  It is clearly targeted towards people working in the PCB industry, but most engineers and even serious hobbyists would probably get something out of it.  That said, this is definitely not a book for beginners!

(And to the other design engineers out there: Want to one-up the manufacturing and reliability guys in the break room?  Read this book!  :-))

Working as an electrical engineer, I have often been faced with thermal design problems. They are usually in the form of: “Given a maximum system temperature X, ensure that the maximum temperature of all devices in the design does not exceed Y.”  Temperature X is usually a customer spec, while temperature Y is almost always driven by MTTF constraints on the semiconductors used in the design.  This sounds simple enough until you realize that:

At the end of the day, numbers are scribbled on envelopes or entered into spreadsheets, guesses estimates are made, and everyone resolves to develop a better thermal model next time, which of course never happens.

I stumbled upon this book at the Stanford University Bookstore a few months ago.  Given my experience (frustration) with thermal design, I couldn’t help but pick it up and start reading.

It’s a fairly quick read and thoroughly entertaining.  Kordyban’s style is very informal.  The chapters are in the form of several short stories about fictional characters at a made-up company called TeleLeap.  These characters have to solve a series of design problems, which are used as examples to explain several concepts of thermal design.  There are no lengthy derivations and the technical discussions are pretty understandable, even to someone who never took thermodynamics in college (like me).

In particular, I found Kordyban’s discussions of the errors that can creep into thermocouple measurements, the difficulty of measuring junction temperature directly, and the problem with pin-fin heatsinks very interesting and educational.  I won’t say that I am an expert in thermal design having read this book, but I do have just a little bit more insight into what’s going on (and what to avoid).

Unfortunately, the book is out of print, so you’ll have to find a used copy and pay some big bucks – unless you get lucky like I did and find one that’s still sitting on the shelf.  No, you can’t have mine!

Hot Air Rises and Heat Sinks: Everything You Know About Cooling Electronics Is Wrong 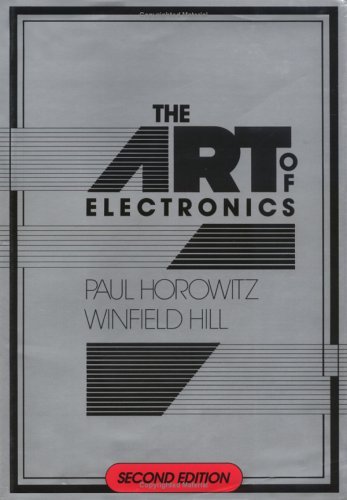 The Art of Electronics

, by Horowitz and Hill, has been referred to by some as the electronics bible.  Within its 1125 pages are everything from a “what is a resistor?” level introduction to passive and active circuits to a thorough treatment of op-amps, phased locked loops, logic family interfacing, and shielding and noise elimination techniques.  This book has some of everything, at least everything that was relevant to electronics engineering in 1989 when it was last updated.

True, this means it is horribly out of date with regards to computers, microcontrollers, and EDA/CAD tools – but this is a book about fundamentals, not the latest fad in physical computing (ie. Arduino).

The authors even have a cool website (admittedly it was last updated in 1999) with a list of unusual uses of The Book (note proper capitalization).

There are rumors of a third edition to be released in 2010.