I’m a little bit late posting this, but as most folks are now aware, Maker Media is struggling. Make Magazine and the Maker Faire were major sources of inspiration for me in the mid 2000s when I created MightyOhm. I owe a lot to the folks behind Maker Media and the makers who inspired me in those early years.

EMSL and Ben Krasnow have been posting early Maker Faire photos and I wanted to contribute some of mine as well.

Scroll down for photos of the first ever Maker Faire, held in San Mateo way back in 2006!

Dale Dougherty and the staff behind Maker Media and the Maker Faire – THANK YOU for years of inspiration, laughs, friends, fun, and LOTS of tasty paella. You guys rock.

The 2014 Maker Faire Bay Area will take place in San Mateo, CA this coming weekend, May 17-18th.  I’ll be there! No booth this time. I’ll be wandering around the fairgrounds hoping to actually see the Faire this year.

There are three major events of interest to open source hardware and makery folks this month:

I’ll be at OHS and TAPR, but have to skip the NY Maker Faire this year.  I imagine that far fewer folks from OHS will be attending NYMF now that those events are no longer co-located.

Sorry NYMF, but I can’t turn down an excuse to visit my friends in Harvard square. 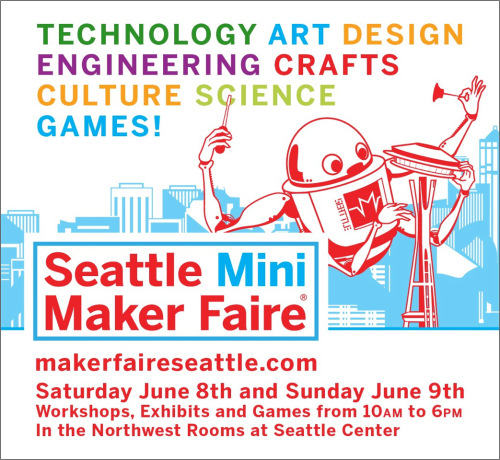 The 2nd(?) annual Seattle Mini Maker Faire will take place next weekend (June 8th-9th, 2013) in the Northwest Rooms at the Seattle Center.

I’ll be there showing off my Glowy Geiger Chimes and selling open source Geiger counter kits, Alan is bringing his Glowputer, and many other Seattle-area makers will be there (here’s a list).

I haven’t had time to post about it, but over the past few weeks I’ve been busy working on a special project for the Maker Faire this year.

This year I am bringing a new and improved version of the “Geiger counter-powered ambient music thing” that I threw together at the last minute last year (and never really came up with a good name for). In that project, I connected five of my open source Geiger Counter kits to an Arduino that sent MIDI commands to a Sparkfun Music Instrument Shield. When each Geiger counter was triggered by background radiation or one of the weakly radioactive sources nearby, the Arduino would send a command to the shield to play a musical note.

This year I’m bringing a new and improved version that uses a new piece of hardware that I designed specifically for the Faire – the Geiger Pad.

Today (yes, once again at the last minute) I finally got all the pieces together and working. If you come to the Faire you’ll be able to see it in person, but I also posted a short video on flickr:

See you at the Faire!