This week I finally got a working copy of the video of my talk from NOTACON 6 about hacking the Asus WL-520gU wireless router.  You can either watch the embedded video above or follow the link below to Vimeo.  If you don’t like either option, you can also download the m4v source file from here (thanks Vimeo!).

Special thanks to Media Archives for recording my talk!

This past weekend, Notacon 6 rocked Cleveland, Ohio with three days of hardware and software hacking, demo competitions, opportunities to meet interesting people, get free stuff (including an awesome consuite) and participate in the chaos of a hacker conference in the midwest.

This was my first trip to both Cleveland and Notacon – and it was totally worth it.

Notacon had a lot going on at once.  This worked really well for someone like me with a lot of interests and a short attention span.  Over the weekend I witnessed many things, including: 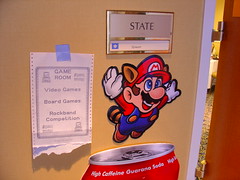 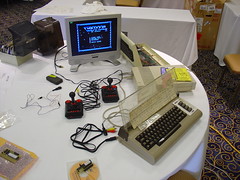 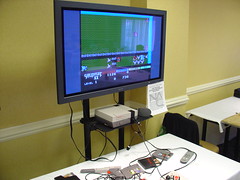 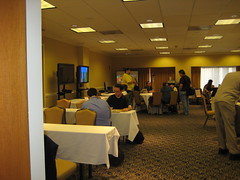 This was a room full of vintage and modern consoles, Rock Band, board games, and people having a good time.  I particularly enjoyed the Commodore 64 area which had some crazy hardware on display (C64 SD card to disk drive interfaces and some ROM hacks). 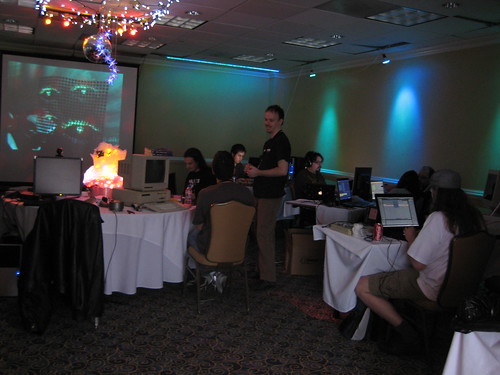 Here members of the demoscene put the finishing touches on their demos for Saturday night’s Blockparty Demo competition.  I think some demos were even conceived/written entirely in the demo room over the course of the weekend. 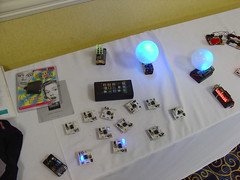 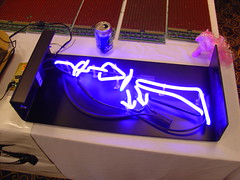 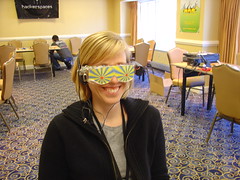 Kylie tried out Mitch Altman‘s  brain machine.  People were pretty much soldering things together all weekend.  There was a neon LED symbol.  It was cool. 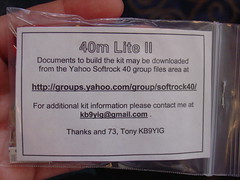 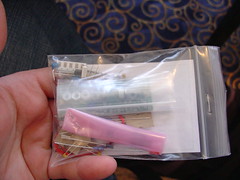 I bought a 40m Softrock Lite II kit from Christopher Pilkington (who also gave a talk on Hacking and Amateur Radio).   This kit receives 7 MHz radio signals and mixes them down to quadrature audio signals that can be decoded with a PC – a very cheap way to start playing with software defined radio.

There was an HF remote control setup for a radio on the roof and an amateur radio license exam on Sunday.  I was debating upgrading my license class to General, but sleep won out over the exam.

Blockparty also took place during Notacon.  I came to the con already pretty familiar with the demoscene, having owned an Amiga computer (a very popular platform for demos) in the 1990s.  15 years later, I found myself at North America’s longest running demo party watching demos being screened at 3AM in the morning.  How cool is that??

Kylie and I met Jeri Ellsworth and George Sanger, who produce a show about prototyping stuff called The Fat Man and Circuit Girl.   If you haven’t seen it yet, check it out.  They did a live show at Notacon that I found really inspirational.  More on that later.

I gave a talk about Hacking the WL-520gU Wireless Router, and for my first talk at a major hacker conference I thought it went really well.  For now you can only download the slides, but eventually there should be links to videos of all the talks on the Notacon Media page.

In short: Great conference, great talks, great people.  It was awesome.  A+, would do it again. 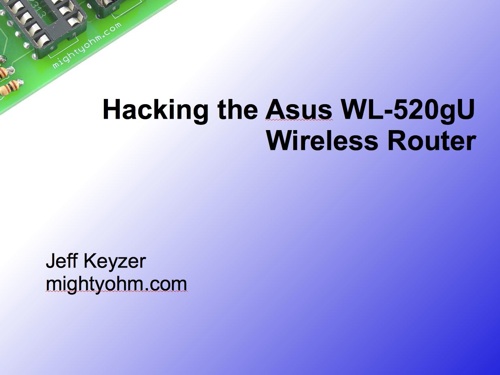 I just uploaded the slides from my talk at NOTACON about Hacking the Asus WL-520gU Wireless Router.

Eventually a video of the talk will be available from the NOTACON media archive, but for now check out the slides to see some examples of what can be done with the Asus WL-520gU uber hacking platform.

If you have any questions about the talk, you can ask them over on the forums or contact me directly.

It’s almost time to board the plane and I’m still messing with the slides for my talk at 1PM tomorrow in the East Ballroom at Notacon 6.

It’s a good thing this stuff is so much fun, otherwise I might ask myself – why am I doing this??

I’m hoping to meet some cool peeps at the non-con.  I’ll have Rescue Shield kits and stickers with me for anyone who wants to check them out. Even if you don’t see my talk, say hi sometime during the weekend.  I’ll be the nerdy looking tall guy in the black shirt.  Oh wait…

Have you created a project or hack based on the Asus WL-520gU or WL-500gP Wireless Routers?

It doesn’t matter if it was inspired by my project or developed independently – I’d love to hear from you!

I’m putting together a talk for NOTACON and I’d like to feature as many projects as I can to spread the word about how powerful, flexible, and affordable these routers are, especially when coupled with a Linux package (DD-WRT, Tomato, OpenWrt, etc.) and USB devices.