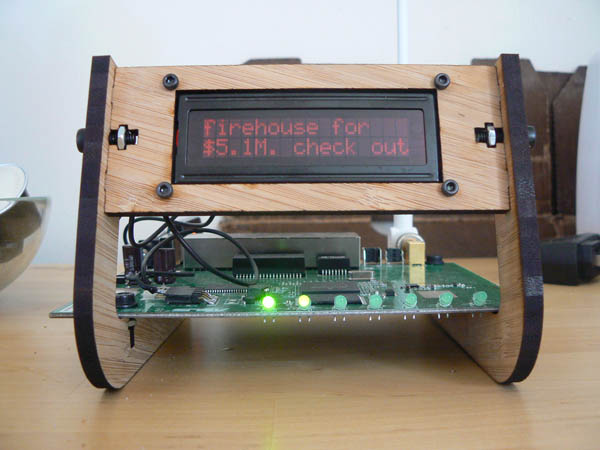 David Nichols made this awesome wireless twitter display by combining a hacked Asus WL-520gU wireless router with a Sparkfun serial-enabled LCD display.  The router is running the same OpenWrt distribution I used for my Wifi Radio project, plus a USB thumbdrive that provides some additional flash storage space.  I really like the custom laser cut base that holds the LCD display and the router!

For more pics and info, check out David’s flickr set for the project. 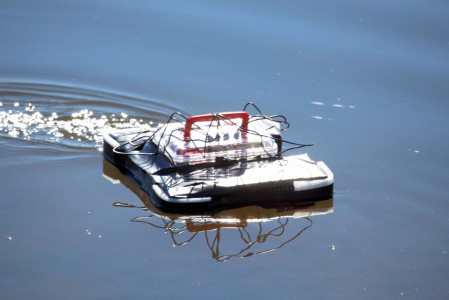 A couple weeks ago, I posted about Madox, who created a floating camera platform based on an Asus WL-520gU wireless router and called it the Madox Floating Camera, or MFC.

Great news – he finished putting the MFC together just in time for the Australian Battle Group meet on June 6th and posted some pictures and videos of it in action.  Apparently the assembly involved a lot of duct tape and he had a few minor issues with the rig, but you can’t tell from the videos!

For technical details about this project, check out his MFC project page.

Here’s a sample video of scale warship combat as seen by the MFC:

(Note: your speakers are not broken, there is no audio!)

I really love this project and I hope to keep reading about it as Madox works out the bugs.

Madox – Keep up the good work!

Many people have asked me for a cost breakdown of my Wifi Radio project.  Well, here it is!

I added a link to possible sources for as many parts as I could.  However, there were a few things I scrounged from local surplus electronics stores and couldn’t easily find a good equivalent online.  I’m not expecting everyone to copy my design exactly (not everyone has a woodworking shop at their disposal), so use these numbers as a rough estimate only.

If you shop around you should be able to beat the listed prices on many items, so I see this as sort of a worst case scenario.

To flash the wireless router and create a minimal radio (with no user interface), you will need:

(This is on the high end, the interface can certainly be built for less by using scrounged/surplus components.)

To make the finished radio, add:

Oh yeah, and I almost forgot…

If you take out the cost of the development tools, namely the FTDI cable and the USBtinyISP, the total comes out to $105 (without the box).

By scrounging materials and using parts from your junkbox you should be able to reduce that figure even more, but obviously the grand total hinges on what kind of enclosure you use.  Not everyone has a friend with serious woodworking skills willing to donate time and materials, but use this as an excuse to get creative.

I wanted a box that showcased the time and effort that I spent on the electronics inside, but that doesn’t mean an old boombox from the Salvation Army couldn’t work just as well.

When I first started this project, my goal was to keep the total parts cost under $100.  On paper, it looks like I came pretty close to that, thanks to the donated box and excluding the reusable development tools like the FTDI cable and AVR programmer.  To be honest, I probably spent twice that amount on spare power supplies, extra knobs, a second router to bring to NOTACON, and a bunch of other stuff that I didn’t end up using in the final project.  But I’m pretty ok with that.  I think this just highlights the fact that:

If you just want a Wifi Radio, it will always be cheaper to buy one off the shelf.

But if you make your own, it will be infinitely more rewarding.

It certainly has been for me.  🙂

Madox is building something he calls the MFC or Madox Floating Camera.

Presently, it consists of an Asus WL-520gU wireless router mounted in a waterproof box along with batteries, a relay control board, and four large bilge pumps for propulsion.  He plans to add a camera so he can take his contraption to the Australian Battle Group meet in June where he “hopes to film the ships shooting each another to smithereens”.

His latest post includes a video (above) of the propulsion system being tested in his bathtub.  I can’t wait to see some larger scale tests, it looks like this rig is capable of some serious speed!

for $34.99 after rebate. This is the lowest price I have seen in a while, so if you’ve been debating picking one of these up to play with, it might be a good time to buy.

The WL-520gU is the very hackable wireless router I used in my Wifi Radio project.  It’s also the router used in LadyAda’s Tweet-a-Watt and the subject of a talk I gave this year at NOTACON.

It’s interesting to note that Newegg recently added the words “DD-WRT Open Source support” to the product title, so obviously they are aware of how many people buy these routers just to toss the stock firmware and throw on DD-WRT, Tomato, OpenWrt, or the oleg.wl500g.info firmware instead.